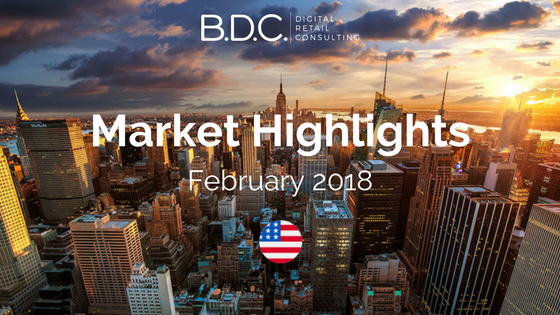 Every month B.D.C. unveils Retail essential information. Latest trends and innovations, key players, startups, market figures… Do not miss the latest Retail news, check them out in 60 secondes only.

Even though you did not watch it, you can not have missed the Super Bowl! According to the National Retail Federation, American consumers are presumed to have spent $15.3 billion on 2018 Super Bowl.

Another major retail time in February is Valentine’s Day. NRF has also made its predictions: American households are expected to spend $19.6 billion, a 7.7% increase compared with 2017 sales.

Walmart recently expanded its startup portfolio via Store no. 8 with the acquisition of virtual reality startup Spatialand. ‘Virtual reality has the potential to reinvent the way our customers shop’, says Katie Finnegan, Principal & Founder of the retailer’s incubator tech. Founded in 2017, Store no. 8 aims to support internal startups development.

Following the acquisition of the grocery delivery startup Shipt, Target has launched its same-day delivery offer. Some stores in three different US states benefit from this service since February 1st. In addition, the retailer intends to deploy this offer by the end of 2018 to the whole country. Shipt has been acquired last December 2017 for $550 million cash. Founded in 2014 in Alabama, Shipt charges only $99 a year for unlimited groceries deliveries; a cheaper offer than Amazon Fresh, which costs $179.88 per year.

Lidl is slowing down its US expansion. Since June 2017, 49 locations has been opened by the retailer. It intended to open 100 stores by 2018, but the fierce competition prevailing in the US grocery ecosystem encourages the German hard-discounter to rethink its property real estate model, which might mean switching from big boxes to small-format stores.

Grocery delivery startup Instacart raised $200M to fuel its rivalry against Amazon. Since 2012, the San Francisco-based company helps local retailers to deliver groceries and home essentials to their shoppers. To date, Instacart can boast about having more than 200 grocery partners, including 7 of the top 8.

This announcement follows Amazon’s which unveiled its move to enrich its grocery delivery services, on February 7th. For now, Prime customers in Austin, Cincinnati, Dallas, and Virginia Beach can have their Whole Foods groceries delivered by Amazon in two hours for free, or within one hour for $7.99, for orders of $35 or more.

This explains why Whole Foods – Instacart’s biggest shareholders and major partner – has missed this latest funding round, which now cumulates a total funding of almost $900 million. That translates the complexity of partnerships when Amazon is in the loop. In any way, Apoorva Mehta, Instacart’s co-founder and chief executive officer, is clear about his will about the future of grocery retail: ‘We raised it because we want to win’, he said. The startup is now considering expanding its business beyond the current US and Canada markets but also beyond delivery itself.