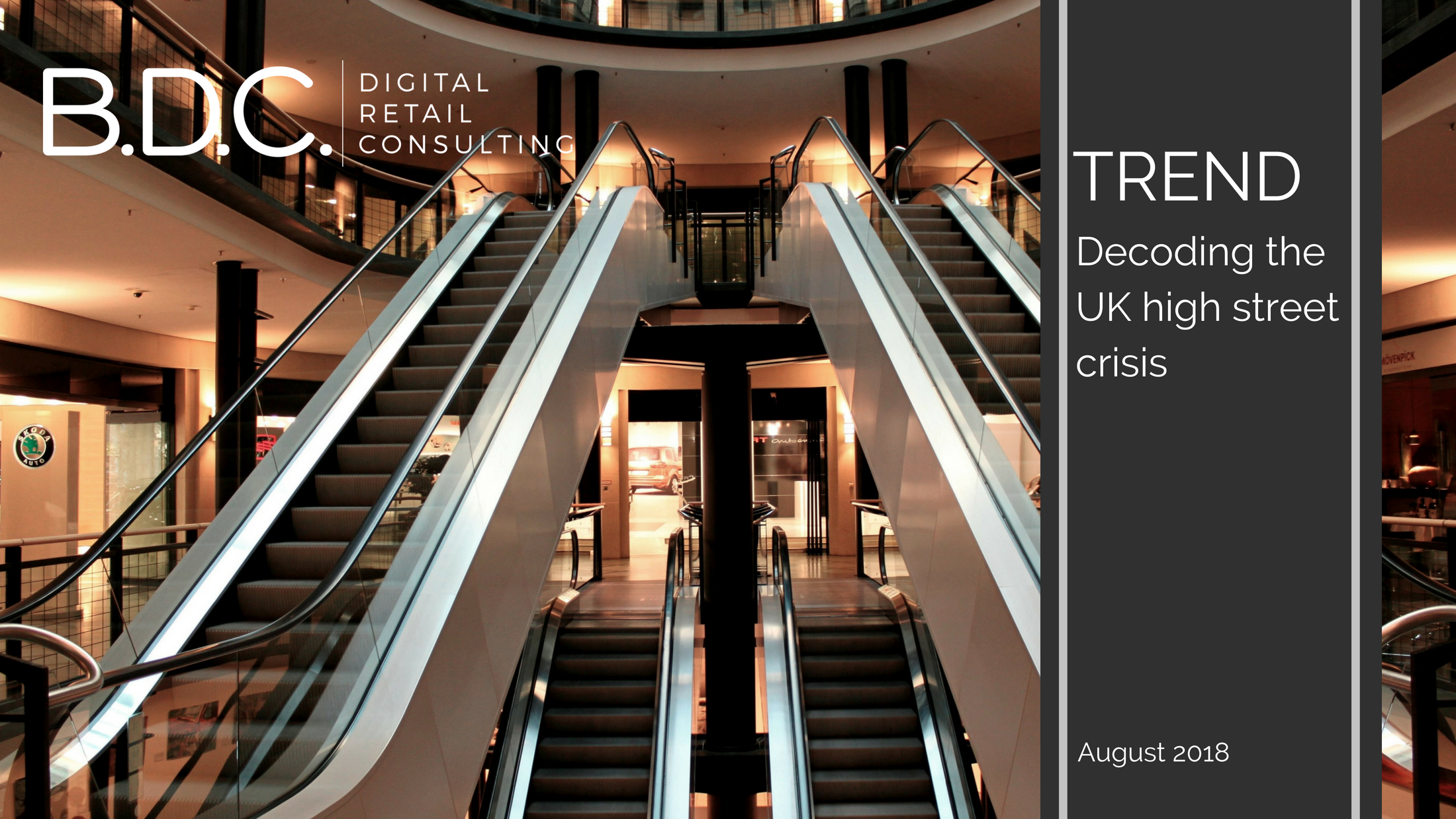 In February, Toys R Us and Maplin closed doors, making disappear 5,500 jobs. Large chains such as Tesco, Sainsbury’s or Morrisons have encountered major internal changes, especially regarding management positions. In June, House of Fraser closed half of its UK stores, a decision that affected 6,000 workers. Last month, Poundworld also announced the closure of its remaining 230 stores. Finally, Marks and Spencer (M&S) axed 350 management roles and plans to close 100 more stores by 2022.

Indeed, despite a slight increase in sales over the last two months (due to good weather, and events such as the royal wedding or the world cup), retailers keep facing major struggles regarding their offline presence.

The shift to online shopping, decreased footfall in stores and rising new players:

High street retailers must face many challenges to stay in the race. First, the fight against giant pure-players has escalated more than ever in the past months. More shoppers now consider online shopping to be easier and cheaper than heading out to a physical shop. According to the Office for National Statistics, while total retail sales grew 1.4% in 2017, online sales maintain a double digit growth with an increase of 12.1%.

Retail footfall dipped for the seventh month in a row in June as the heatwave deterred consumers from visiting shops, despite a boost in spending prompted by World Cup fever. According to the monthly BRC-Springboard Footfall and Vacancies Monitor the overall footfall slipped by 0.9%  in June, year-on-year.

Brick-and-mortar stores also go through new threat coming from the increase of costs (minimum wages, insurance and utility bills are constantly increasing). Yet, the most significant burden for retailers are business rates (taxes on business properties), which have never been higher. As an example, M&S decided to close its Covent Garden store, describing rates as “an unfair burden of taxation directly contributing to the challenges that high street is facing“.

The problem is that too many firms used to expand stores beyond what was necessary when times were good and that left them exposed. Now, retailers must shut down stores across the country as they can’t face rising business rates.

Struggling brands need to reinvent themselves to compete

Although some retailers had to shut down some of their stores, many are reacting by focusing on their digital strategy to compete with pure-players services. Maintining traffic in-store by offering customers unique offline shopping experience is now absolutely key for retailers.

As an example, M&S partnered with Microsoft to focus on the potential uses of AI in its stores. It just launched last week a data skills academy to train 1,000 of its employees into data science.

For its part, the clothing retailer Zara has managed to bridge the physical with the digital to create an immersive customer experience. Its new store in Westfield Stratford is concrete evidence of that significant digital turn. Digital screens responding to RFID tags on clothes, Click&Collect section, self check-out stations and VR experience…

Traditionnally being present via large stores outside cities, IKEA has now decided to expand to city centers with 4 Order & Collection concept stores. And it plans to open a new branch in Tottenham Court Road by the end of the year. This new store format is pushing online sales and brings IKEA closer to its customers base. Digital screens in-store and planification services, collection of online order in those city stores… a new approach that supports IKEA new strategy in order to remains competitive as well as online than offline.

Brexit is shaking the UK retail landscape and customers purchase habits are changing, moving from offline to online shopping. Retailers must be agile and engage deep changes into their organisations as well as regarding customers-facing experience schemes. IKEA, Zara and some other leaders have managed to differentiate themselves in these challenging times.