Black Friday, to buy or not to buy? 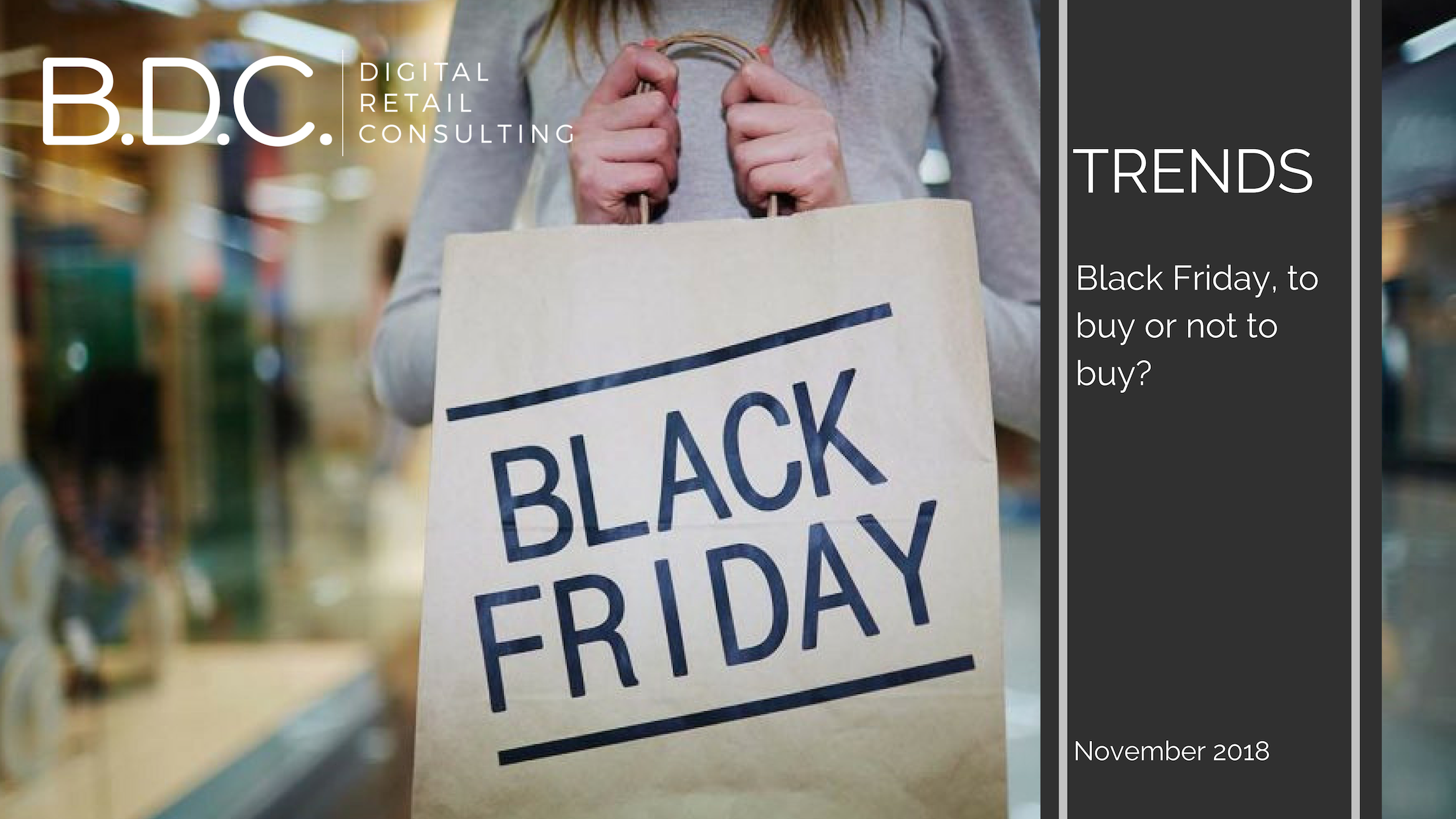 Coming from the US, Black Friday, the one-day sales event is now lasting almost a week, culminating with Cyber Monday. This month, B.D.C. looked more closely to this retail event that shakes the entire industry each year.

Originally the day after Thanksgiving in the US, Black Friday was a one-day event during which shoppers were rushing in stores to enjoy deals on thousands of products. Competition has been increasing constantly ever since, lowering prices to the maximum. Then the event went from one day to an entire weekend, ending with Cyber Monday. It is now lasting over a week and has reshaped British shopping habits during the entire month of November.

In 2017, sales in Great Britain grew faster in November than in December for the first time, according to the Office for National Statistics. Customers prefer waiting for November deals to save money and start making their Christmas presents. McKinsey showed in October that 77% at least were planning to look for bargains, while 30% definitely planned to purchase.

The format of the event itself has changed. Black Friday deals were originally shopped in-store while Cyber Monday bargains were found purely online. Now sales last a week and it has transformed into an hybrid online-offline event as Black Friday deals are now shopped online and offline. Last year, 39% of Black Friday sales were made online in the UK only. Shoppers are not fighting each other in stores anymore when they can buy quietly from their houses.

Coming from the United States, the event didn’t really exist 10 years ago in the UK. Black Friday is now as known as Bank Holidays in the UK, with 98% of the population now aware of the phenomenon. 7.5 million were even planning to change their behaviour around the day, either by staying up late or setting their alarm to get up earlier than usual. And for Tim Robinson, CEO of the parcel network company Doddle:

“Any buying event with enough pull to change behaviours is too powerful to ignore in any climate, let alone in a climate as tough as the current one.”

A massive event that requires logistical and technical adjustments

Each year, Black Friday goes with unbelievable numbers that force retailers to adapt to significant amount of orders in a short period of time. Logistics and customer service requirements become more than ever a hot topic. Although, obviously, retailers don’t need to stock thousands of products anymore as they used to, waiting for customers to shop them in stores.

With the online shift of the event, Black Friday was expected to generate more than £1.5 billion sales on Internet, a 12% increase compared to 2017, according to a BearingPoint study. Even though 30% of those sales will be Click&Collect, retailers will need to home-deliver the other 70%. Besides, they should expect around six million orders, worth £300 million, to be returned following the event.

Last year, in the UK, 39% of sales came from smartphones, totaling £1.4 billion. For Amazon, this figure came to 50%. The electronics provider Currys PC World saw its highest volume of sales of televisions on Black Friday, while Argos saw 13,496 shoppers visit its website every minute. As the most popular search was “Black Friday best deals”, challenge for sellers is to appear in the first rows, which brings advertising costs to massive amounts. Also, these massive sales events bring the issue of infrastructures, as one little technical issue could cost thousands or millions to a retailer. During Prime Day in July 16, some technical glitches for the first hours on Amazon website costed the giant more than £56 million estimated loss.

Despite popularity, customers are starting to be wary of whether the deals they get are truly cheaper. Consumers’ Association Which? found that 9 in 10 Black Friday “bargains” are cheaper or the same during the year. A survey from finder.com even showed that 21% of surveyed UK customers regret purchases they made last year. Average spending is expected to drop by £84 this year.

On the other hand, some retailers across the globe are reluctant to participate in the shopping event as well. Instead, they opt to donate part or all of their profits earned this day. Some insist on the environmental and family values we should rather focus on. Meanwhile small businesses claim their prices are already as low as possible during the year.

In 2016, Patagonia donated 100% of its record-breaking £7.8 million profits to grassroots environmental groups. For the last three years, the US outdoor clothing retailer REI boycotted this event and launched #OptOutside. Promoting time spent outdoors, it closed all 143 of its stores and paid all employees to just be outside and enjoy their time.

For this year’s edition, Primark, Asda, B&Q and Marks & Spencer said they won’t be taking part in the flash sales event neither. For now, given the strong shopper engagement, retailers should probably still play their part into it as well. Over the short term, sales will just be picked up by their competitors. Especially with such a tough context in the high street and as Black Friday is now outshining Boxing Day, every penny counts. However, we might question whether the opt out alternative will pay off on the long-term.

Black Friday is far from getting unanimous approval. It could even slow down over the next years with consumers and retailers gradually trying to distance from the massive event. This year’s results drew the same conclusions. According to retail software company Springboard, brick and mortar stores have seen a 5.4% decline in footfall compared to 2017. Shopping centres were the most impacted with a 8.3% decrease in traffic. Barclaycard recorded a 12% decline in consumer spending despite a 10% increase in credit card transactions.

Yet, the success of the event has inspired retailers to create their own shopping day. Starting with Amazon and its Prime Day, which is limited to its members, and quickly followed by Alibaba.

In 2009, Chinese founder Jack Ma picked up Singles Day, an already existing event to celebrate those who are single. The one-day event transformed into a massive sales holiday that instantly hit all records. On November 11, Alibaba alone recorded £775 million of sales within the first 85 seconds of the event and £7.8 billion within the first hour. In total, with more than 1 billion orders, sales totaled £24 billion in only one day, while Black Friday sales were £3.9 billion last year. In the UK, it is already quickly overtaking Black Friday.