Black Friday & Christmas 2017: get ready now for the peak season 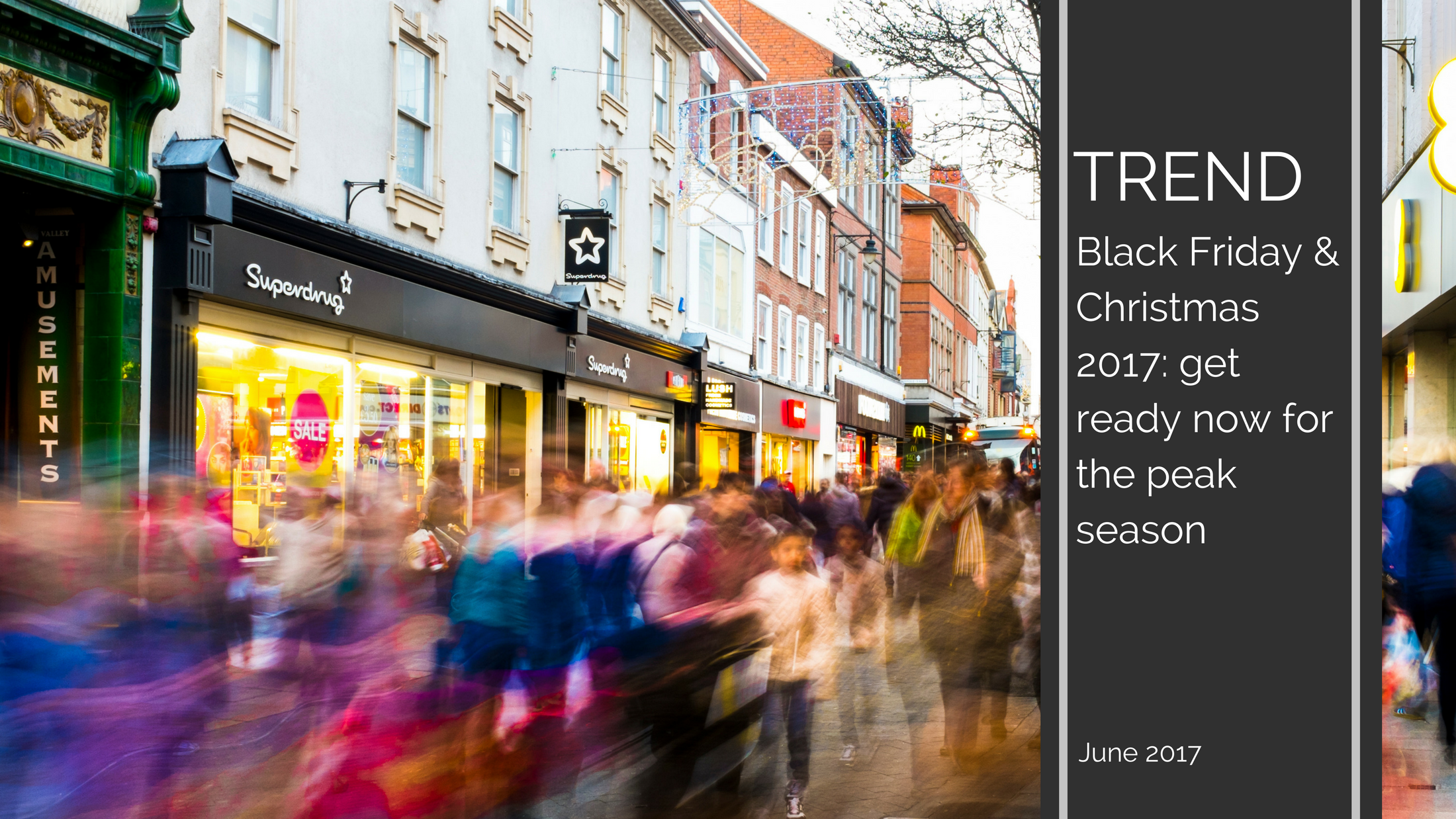 Posted at 20:22h in Trends by Anne Wonner

Since Black Friday disrupted our retail calendar, it became even more important (and difficult) to forecast sales and customers behaviours. Always supporting retailers to improve their shopping experience, our team of experts established for you a peak season checklist.  Have a look and get ready for the big time now.

Be aware of previous peak behaviours and set up your perimeter

Black Friday first appeared in the UK in 2009 with mostly Amazon running discounts. Across the years, it gained in prominence to become unmissable time of the year. In 2015, it extended from a day to a long weekend (Thursday to Monday) and in 2016, from a long weekend to a week (Monday to Monday). In line with the tremendous sales growth during the peak season, retailers as well as customers significantly changed their behaviours and it is crucia. Indeed, setting up a Black Friday campaign is now a must-have for retailers as 65 retailers among the top 75 UK retailers have been doing Black Friday in 2016 (on the day itself) and over 43 were already running promotions by November 14th. Also during the Holiday 2016, we noticed peaks on December 19th (last day on which consumers still felt confident placing orders to receive them on time for Christmas) and on December 23rd for the late-late shoppers (tacking advantage of fast delivery services or click-&-collect). Finally, on Christmas Eve and Boxing Day, smartphones accounted for the biggest share for sales against desktop or tablets as most people visit their family and don’t have access to other devices than their mobiles.

Taking into account those previous behaviours, identify what and when will be YOUR peak campaign. As mentioned Black Friday became a ”peak week” in 2016 but it doesn’t necessarily means you have to run promotions the whole time. Some retailers will launch earlier and others later. So think about what works well for you and your audience, work around this defined time period and remain flexible if one of your main competitor get an unpredictable move.

Stand out from the crowd with imaginative adverts

As Black Friday has been identified to discounts and shifting products, retailers tend to forget their online best practices. Indeed, as the peak time-frame has been condensed into few days or a week, the margin for error is (very) close to zero. As a result, retailers focused on deals visibility and margins to the detriment of creative marketing approaches. The ‘advertising fatigue‘ is real with sometimes so many campaigns (sometimes minimalists) calling customers to delve into a wide range of deals. Customers are attracted from one discount to another, loosing curiosity and brand sensitivity. On Black Friday 2016, the Metro newspaper featured 35 Black Friday adverts leaving little room for engaging campaigns. Shoppers expect to be surprised as Black Friday became for them an important time of the year and retailers must be more creative in the way they address Black Friday deals to customers. This is what will make the difference in 2017. Nonetheless it’s worth noticing this is not the case for Christmas where retailers increasingly produce inspiring video campaigns (i.e.: John Lewis Christmas advert 2016 with the dog Buster got more than 21 millions views).

In 2014, Black Friday sales exploded and many retailers got surprised. In order to avoid any fulfilment issues again and customers dissatisfaction, retailers must anticipate and be well prepared on the logistic side. The IMRG MetaPack Uk Delivery Index from January 2017 reported an unexpected development which is the disruption to month-on-month (MoM) growth rates. October-November rates exploded in 2015 and remained the same in 2016 (+40% both years) which is due to a bulk of orders being pulled forward from December. November-December MoM growth rate decreased in 2016 (+4.5% in 2016 vs. +14.3%) however the highest number of orders are still fulfilled in December but November is now accounting in much larger way.

The new features of this peak season also reveal new customers expectations. Shoppers are impatient during Black Friday peak and traffic volumes can be a real challenge for your operations. This is why it is key to test your systems, channels from back-end operations to front-end services. No choice, you must guarantee smooth shopping experience to customers.

Have a follow-up marketing plan

Last but no least, retailers will need a follow-up marketing plan in order to convert sales hunters into loyal customers. Indeed as shoppers are attracted by a wide range of discounts during the peak season, they are keen to buy from different retailers or brands for the first as long as it is a bargain for them. They no intention to become loyal and long-term customers sometimes. This is why retailers must plan beyond the peak time and think about what those customers will (or might) become afterwards. In addition, it will provide you a greater results in the long-term which will make any potential short-term loss over this period much more sustainable.