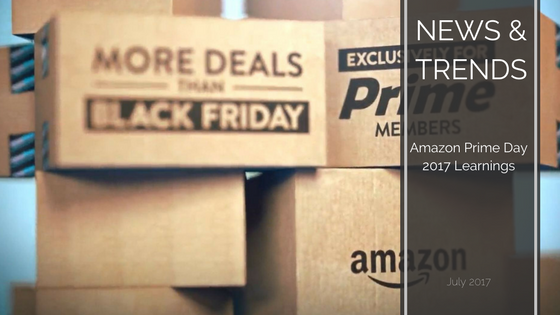 Amazon succeeding its own challenge

For its third edition, Amazon can boast about realizing its best results since the launch of this sales event, likely to top $1 billion (globally) for the first time. To recap, the $136 bn company pampered its Prime subscribers during a 30-hour marathon of exclusive deals on 800,000 items up to 70% throughout 13 countries (but average discount being comprised between -41% and -84%) while lightning flash sales every 5 minutes. Apart from asking free products and instantaneous delivery for all of them, it becomes hard to ask for more, isn’t it?

Focusing on the best-selling products “from any manufacturer in any category across Amazon globally” (according to Amazon Press Release): here is the Echo Dot (35$ with a 30% price cut)! But if French “Primers” were big fans of Playstation Plus memberships and Game of Thrones Season 1 to 6 Blu-Ray, U.S. citizens largely appreciated the Instant Pot Duo.

For its whole history, (without giving the data) Amazon announced having registered its highest rate of new subscriptions on July, 11th. Moreover, +50% Prime members realized purchases compared to prior year.

Through its Prime program, Amazon has disrupted the mechanics of loyalty programs. Basically, such a scheme rewards customers loyalty according to the frequency and amount of purchases. But actually, the leading e-commerce website brilliantly and completely reversed the rules of the game: make its customers pay to encourage them to spend more. And guess what? It works! At such a point that Amazon subscribers are on pace to become more popular than cable TV in the US…

We can’t deny that being a Prime subscriber unveils real advantages, and Amazon perfectly seized the fair value customers are willing to pay to enjoy all of it. The powerful strength of Amazon Prime is to offer value to clients relying on consistency and variety when looking at Prime benefits: express delivery, “free” access to the entire Kindle library, music and video streaming, cloud services and so on…. Indeed, when the 30-day trial is expired, membership is automatically renewed (as Amazon asks for customers’ banking information to benefit from the free trial). Secondly, services respond to such a high level of expectancy that once you discover and enjoy it, it is almost unconceivable to renounce to it… Well done, Amazon. You did it.

Since 2007, Alibaba organizes each year on 11/11, through its Chinese Amazon BtoC equivalent T-Mall, its famous “Single’s Day”, a kind of “Valentine’s Day” for single people: 24 hours of bargain prices dedicated to not less than 500,000,000 Chinese clients. During the 2016 edition, Alibaba broke a record with $17,8 bn sales and the first $1 bn reached in 5 minutes only. More items were bought in that 24 hours than the entire combined Black Friday and Cyber Monday sales in the United States. Data are eye-popping.

Reaffirming its globalization strategy, it seems that Alibaba didn’t give its final answer as it recently announced that it would launch a US business network through Taobao, facilitating the access of American SMEs to half a billion consumers market.