10 RETAIL HIGHLIGHTS YOU SHOULD NOT HAVE MISSED THIS SUMMER! 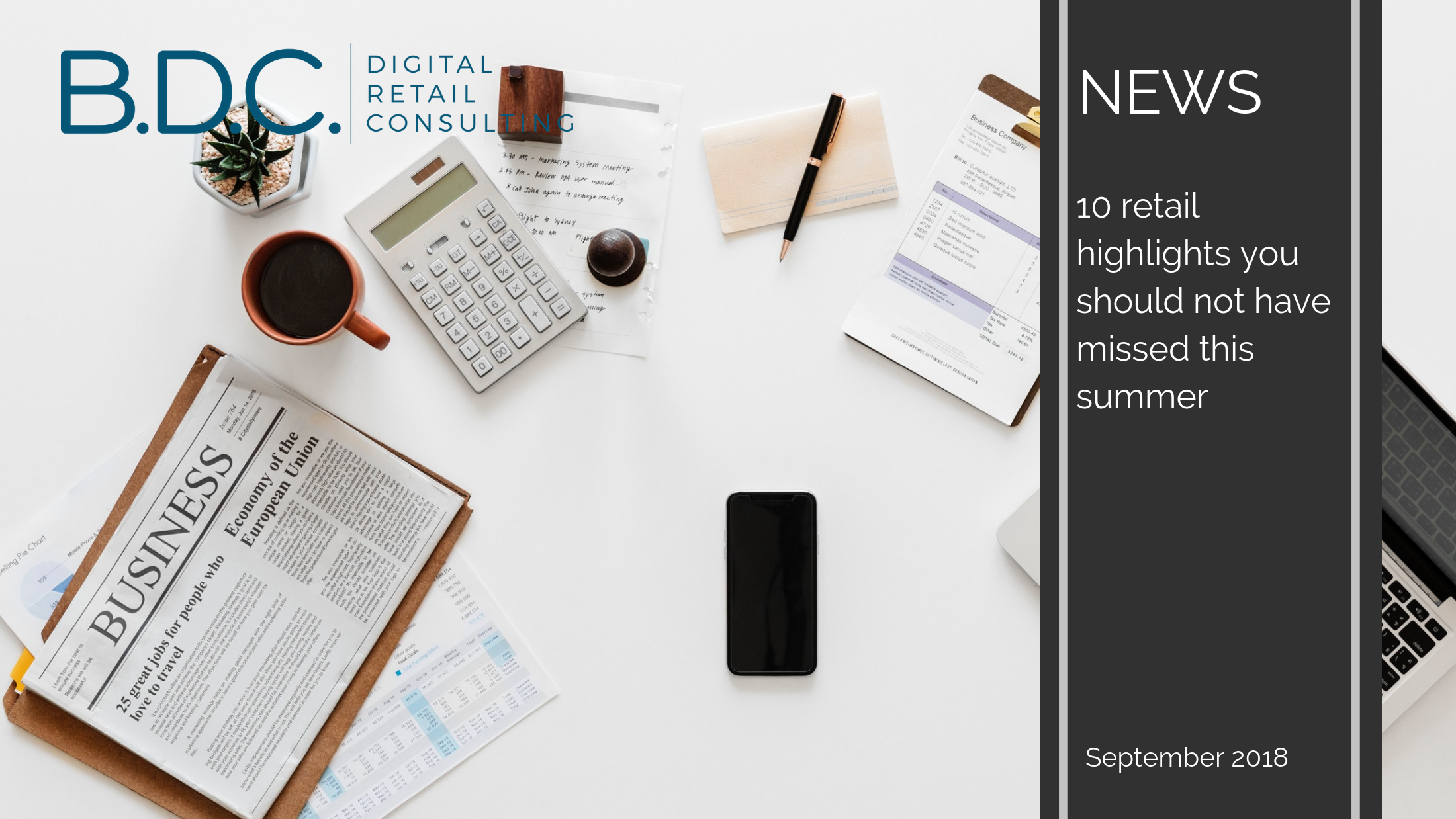 06 Sep 10 RETAIL HIGHLIGHTS YOU SHOULD NOT HAVE MISSED THIS SUMMER!

Time to go back to work! To help you catch up with the latest news, B.D.C. gives you a summary of the 10 retail highlights you should not have missed this summer.

1. Apple reaches $1 trillion value, being the first US-based trillion-dollar company on the market. As a comparison, Google and Microsoft are worth more than $800 billion on the stock market. This vertiginous figure can mostly be explained by the incredible success of its flagship product, the iPhone, which represents half of its turnover.

2. Amazon caught up with Apple by becoming, five weeks later, the second trillion-dollar worth company. The trillion-dollar milestone comes just 50 days after Amazon set a record during its fourth Amazon Prime Day, with over 100 million products sold. This represents $4.19 billion worth of goods, up from $2.41 billion in 2017. The online retailer also recorded an outstanding benefit of $2.5 billion over the past 3 months (+1,184%!), twice the amount that analysts predicted. These results can be justified by the success of Amazon Web Services (+49% turnover).

3. Alibaba beats forecasts with 61% growth ($12.2 billion) in the latest quarter. This success is explained by significant advertising revenues, massive investments (cloud, entertainment and connected stores) as well as many partnerships with brands and brick-and-mortar retailers.

4. Alibaba launched a cashier-free and unstaffed wine shop in Hangzhou. Within one year, five to eight stores will be opened nationwide. The shop introduces the auction concept that allows shoppers to place bids on wines and spirits via Alibaba’s auction platform inside the store.

5. In the UK, Sainsbury’s is also trialing a check-out free app in its Clapham North store to make shopping faster. Customers will be able to scan their products on the Smartshop app, pay through Apple Pay and leave the store without any check-out.

6. Britain’s high streets future remains uncertain, despite a slight increase of sales over the past two months, due to a pleasant weather, a royal wedding and the football World Cup. In July, Poundworld announced the closure of its 230 remaining stores, before being rescued by the Hendersons family who opened the first store in 1984. In August, controversial Sports Direct boss Mike Ashley bought the ailing department store House of Fraser out of administration for £90m. Indeed, many retailers’ physical presence is challenged, as many are failing into administration or are closing stores. Read more

7. Marks and Spencer cut 350 management positions and plans to close another 100 stores by 2022. On the other hand, the retailer focuses more on its digital transformation, by creating a data skills academy to teach machine learning and programming languages to thousands of employees across roles. It aims to develop the most data-oriented leadership team and compete with giants like Amazon.

8. In stores, prices enter inflation for the first time in five years, after 63 consecutive weeks of deflation. Prices just rose by 0.1% this August, compared to a decrease of 0.3% in July. This stays low compared to the increase in costs that retailers must face, in particular the business rates increase.

9. Coca-Cola Co agreed to buy the U.K. chain Costa Coffee for £3.9 billion to gain a global brand to expand in hot drinks. It gives Coca-Cola an instant weight into a business from which it was all but absent, with 3,800 stores in 32 countries, a business of 8,000 self-service machines and a foothold in China.

Bonus: Already established in Lille, London and New York, B.D.C. has the pleasure to announce the opening of its Paris office! Retailers, pure-players, retail tech startups, we are here to assist you in your digital transformation or accelerate your international expansion!

Discover the interview of Anne Wonner, our Paris manager.